The Pacific Northwest Folklore Society was founded in 1953 by Walt Robertson and friends in the University District of Seattle. The Society is devoted to the understanding and development of the folklore of this area. Collection, study, preservation, publication, and performance are all aspects of the Society’s activities. The people of the Pacific Northwest are heir to a rich heritage of legend, song, dance, and other forms of lore. This study greatly aids the understanding not only of ourselves, but of our forebears and the land from which they sprung.

The Beginning Don Firth wrote Early Organization, about the beginning of the Society. After a rough beginning during the turbulent years of the McCarthy “Red Scare,” the Society became inactive by the early ‘60s.

Second Act Fast forward to 2007. Don Firth and Bob Nelson, two founding members of the Society in 1953, and I decided to revive it. Our first event was a house concert with Jeff Warner, a world-class folklorist and folk singer from New Hampshire. He had trouble finding a venue in Seattle, and we thought it was time to revive the Society in order to present and preserve the more traditional folk music and provide a venue for traditional folk musicians, particularly those from our region.

We began monthly Coffeehouse Concerts in 2008, first in a small coffeehouse near Green Lake, then at a café in Crown Hill, at the Wayward Coffeehouse (now gone) in Greenwood, and finally at the Couth Buzzard since May, 2010. We also began occasional Sunday afternoon concerts at the Everett Public Library in 2009. Over those years we have presented local performers such as the Canote Brothers, Squirrel Butter, Pint & Dale, Tania Opland & Mike Freeman, Morgan & Graves, Reggie Miles, Carolyn Cruso, Sara Comer, Alice Stuart, Kate MacLeod & Kat Eggleston, Dale Russ, and many others. We have also attracted some outstanding nationally-recognized performers such as Claudia Schmidt, Kate Power & Steve Einhorn, Debra Cowan, Curtis & Loretta, Small Potatoes, Eleanor Ellis, Cindy Mangsen & Steve Gillette, in addition to Jeff Warner. We even presented three international artists, Brian Peters from England, and a prize-winning country blues duo, Max DeBernardi & Veronica Sbergia, from Italy. The Couth Buzzard is now a sought-after intimate venue for many outstanding musicians. As I look back, what we began in 2007 has far exceeded my modest expectations. We fill an important niche in the local live music scene. Stewart Hendrickson

The PNWFS requires little money to operate, yet there are a few expenses that need to be covered, such as preparing posters and flyers, and maintaining the web site. We would appreciate your donations. Complete the following form and mail it with a check to Stewart Hendrickson, 11720 1st Ave NW, Seattle, WA 98177.

Donate $15 or more and receive one of these complimentary CDs 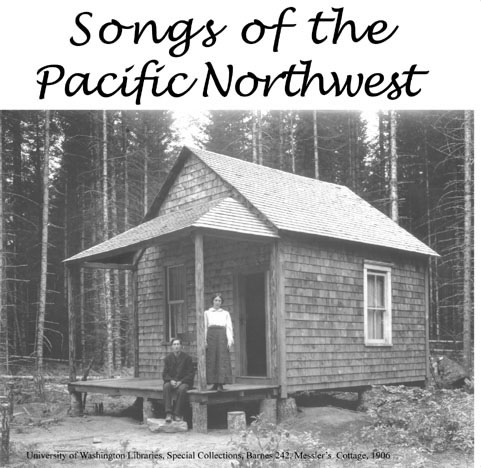 SONGS OF THE PACIFIC NW
This collection of songs grew out of a workshop at Rainy Camp, a weekend singing retreat of the Seattle Song Circle at Camp Don Bosco in Carnation, WA, Feb. 2005. Most of the songs were recorded live in the camp chapel, others were recorded or taken from previous recordings as indicated. Some of these songs are traditional, others are newer songs written in the traditional style. Some have never been recorded before. They all represent a part of the ongoing folklore of the Pacific Northwest.

PADDY GRABER -THE CRAIC WAS GOOD 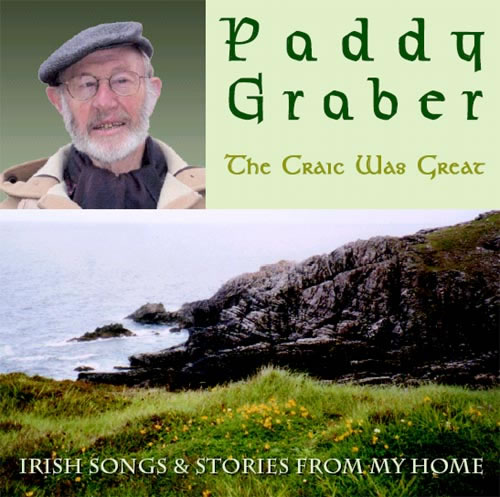 Paddy Graber is a traditional singer and story-teller from Vancouver, B.C. He was born in Clonmel, County Tipperary in Ireland, and grew up in a rich musical family. His mother was a well-known traditional singer in Counties Limerick and Tipperary. Paddy is an expert on Irish history, folklore, and music. Much of his musical repertoire comes from his family in Ireland and often includes local variants of traditional Irish songs. He has also written songs of his own. Paddy has performed at Northwest Folklife Festival in Seattle every year of its existence but one. He is a real treasure, and his songs and stories need to be preserved and passed on to future generations. In November, 2003, I spent a couple of days with Paddy in Seattle, recording his stories and songs. Here is a sample of some of them; there are more to be released in the future. – Stewart Hendrickson, November, 2003.