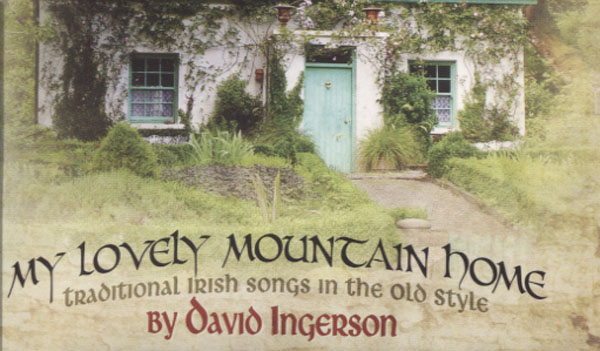 The songs on this recording are probably ones that you’ve never heard before, and they are sung un-accompanied in a style quite different from that which we are most accustomed to hearing in singing. Yet David Ingerson has put together a wonderful collection of songs – really stories – sung in the traditional Irish, or sean-nós, style. For the uninitiated this is an introduction to a different style of folk music. And for those acquainted with this style, a source of mostly-undiscovered material. Altogether a very pleasant listening experience.

Sean-nós is a term, meaning ‘in the old style,’ used mostly by non-Irish to describe what the Irish simply consider as a traditional type of singing. Its emphasis is on telling a story rather than singing in an artful musical manner. Songs are usually sung with a free rhythm and without much emotion in phrasing or dynamics (changes in volume). However it is not a single style, but varies among many Irish singers. The melodies can be simple to very lyrical, and emotion is often conveyed by vocal ornamentation.

Most of the songs on this recording were learned by Ingerson directly from native Irish singers, in the oral tradition rather than from song books or recordings. He begins with The Highwayman Outwitted, a story of how a cunning highwayman is outwitted by a simple farm hand; it ends with an understated punch line. This is followed by Paddy’s Panacea, a humorous song of word play and internal rhyming in the classic Irish tradition, and a repeated chorus joined in by other singers. You can hear these two songs and another one from the CD on Soundcloud.

Other songs are more sentimental, whimsical, tragic, about love, drink, rebellions, immigration and lamentation. The songs are in English except for two, which are sung in the Irish language, and one in a combination of English and Irish. None of the songs are younger than 100-years old and several are in the 200-year range; none are commonly recorded. They represent a treasure trove of mostly undiscovered song material.

Ingerson sings with a pleasant voice and good enunciation; the lyrics are well understood. The CD is accompanied by a 22-page booklet containing lyrics and comments about each song; that alone is worth the price of the CD. This CD is praised by Lillis ó Laoire, winner of the corn ui ríada (cup of the Irish national singing competition): “Great singing, David, very mature and assured in style and realization. Great choice of songs and very fluid and comprehensible Irish. Singing in the diaspora is alive and well. May it continue to prosper.” David has been singing these traditional Irish songs for over 35 years, collecting, researching and performing.

For the uninitiated, this is a good introduction into the art of sean-nós singing. For those familiar with this art form, it is a wonderful source of song material and a good example of Irish singing style. Highly recommended.

One thought on “CD Review: My Lovely Mountain Home”