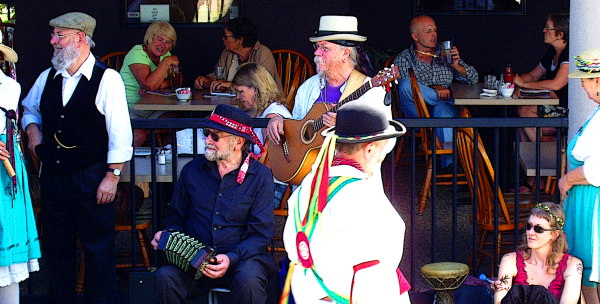 The Eleventh Annual Princeton Traditonal Music Festival takes place in Princeton, B.C. Canada this August 17-19. The whole town of Princeton comes out to support the festival. Near-by “locals” come from the Okanagan area, and others come from Vancouver, other parts of B.C., Washington, Oregon and points even further away. The main focus of the festival is the traditional music and folklore of British Columbia, but it also includes traditional music, liberally defined, from other areas. This festival is enhanced by the friendly people and the small-town atmosphere of Princeton.

The Princeton Traditional Music Festival – 2018. Anyone walking down the streets of Princeton, B.C. Canada, on the weekend of August 17-19th shouldn’t be surprised to hear fiddle tunes wafting across Bridge Street.  Looking west onto Veterans Square they’ll see a big tent with a stage and people sitting in chairs tapping their feet or maybe even dancing in the street.  Walking down Vermilion Avenue towards the Museum they may hear accordions or ballads, or perhaps a song about sailing on the tall ships.

All of this and much more is the kind of music featured at the Eleventh Annual Princeton Traditional Music Festival. Over 160 musicians will be in town that weekend, some of them local, many of them from the coast, and some from as far away as California.

The Festival begins on the evening of Friday, August 17th with the opening ceremony followed a community dance on Veterans’ Way beside the Legion. The dance will feature a live band.  Everyone is welcome. There will be a caller to teach the dances so no experience is necessary and people don’t even need to bring a partner.  On Saturday and Sunday there will be music from 10 am until 6 pm on two stages – one on Veterans Square and one in front of the Museum. There will also be an acoustic stage (no amplification) in the Princeton Library on Saturday.

And it’s all free!  No admission will be charged.  The reason for this is that the Festival is run entirely by volunteers and the musicians are donating their talents.

The focus of the music is oral tradition and history. Although the word “traditional”, when associated with music, is generally used to describe the musical traditions of Irish, Scottish, Welsh, Cornish, Manx, and Breton cultures, the concept can easily be expanded to include music which centers on the poetry of the human condition. Indeed, in this day and age, it is difficult to not do so. Traditional music then, is an art form which speaks to our history and teaches us something about ourselves.

This music originates from the very people whose lives it chronicles. It is not only an expression of life on the sea, in work camps, mines, and factories, but it also speaks of childhood and family life. This is not the music of concert halls, but rather that of the streets, pubs, picket lines, weddings, funerals, and family kitchens. In short, this is music that belongs everywhere, and to everyone.

In defining this art form it is impossible to ignore the non-verbal expressions which are closely related, inspired by, or directly associated with it. One cannot dissociate dance from the music. In the same vein, where there are musicians there will always be an instrumental narrative, even just for the simple joy of playing. Often too, these non-verbal expressions are inspired by the same environment or events which gave birth to the purely oral traditions. In the end, this art is all about the human condition and tells the story of our cultures and where we came from.