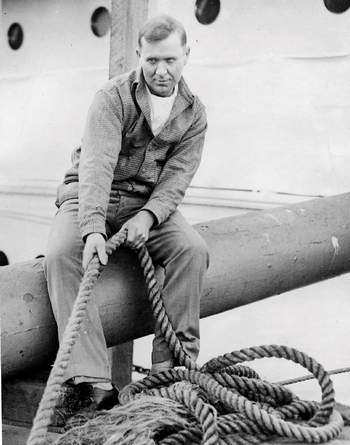 The CD, Songs of the Pacific Northwest, has songs contributed by sixteen regional musicians. Since logging played a big part in our history it is not surprising that a number of these songs are about logging. One of the most well-known logging songs is The Frozen Logger. It was written in 1929 by James Stevens, who lived in Seattle during his later years. Who was this guy and what other things did he do? How did Paul Bunyan fit into this?

James Stevens (1892 – 1971) was born on a rented farm in Iowa. His “gypsy father” left home and decided to roam. His mother worked as a hired girl for $12 per month, so he was raised by his grandmother. At age 10 he was sent to live with his father in Midvale, Idaho, where he learned to handle horses and cattle. In 1907 he attended the Idaho Industrial Institute near Weiser, but left school – was expelled – and hopped a train to Boise, Montana. There he discovered the Carnegie Free Public Library where he began his self education. He called public libraries “the poor man’s universities.”

He worked summers in lumber camps in Idaho, Minnesota, and Washington, where late at night around the bunkhouse stove he listened to the lore of the woods and tall tales of Paul Bunyan. He also hopped trains to work harvesting wheat and picking fruit. As he traveled around he loved to fight in street brawls and was remembered as “a damned tough customer.”

Later he traveled to Northern California, working in logging around Mt Lassen, and started writing and publishing poems – he sold one to the San Francisco Examiner for $50. During World War I he joined the Oregon National Guard.  He was first stationed at Ft. Lawson in Seattle and then sent to France, but saw no action in the war. However at the end of the war he received a scar in a street brawl.

He developed an interest in books and characterized himself as “a hobo laborer with wishful literary yearning.” He sent an article By a Laborer to the Saturday Evening Post and the editor, George Lorimer saw promise in him. H.L. Mencken took his story The Black Duck Diner to publish in the American Mercury. Menken then became his mentor. Stevens settled in Portland, Oregon and began writing for H. L. Mencken’s American Mercury magazine. One of his stories was about the mythical giant Paul Bunyan, which later evolved into a best-selling book.

According to Stevens, “The Paul legend has its origin in the Papineau Rebellion in 1837.” This was a revolt by French-Canadians against their young English queen. Among them was a “bearded, mighty-muscled,  bellicose, rebellious giant named Paul Bunyon” (note the French spelling). His slaughters became legend. He later operated a logging camp where he became the most famous camp chief in Canada. At nights around the fire in logging camp cookhouses, songs and tall tales about him abounded.

By 1860 Paul Bunyan became a genuine legendary folk hero. Lumber companies used these legends in their promotional literature. But it was Stevens who, in his book Paul Bunyan (published by Alfred Knopf in 1925) and in later writings, established Paul Bunyan stories as a significant part of American literature.

By the end of his literary career Stevens had produced nine books and more than 250 stories and magazine articles. Among his works were Brawny Man (1926), Mattock (1927), Homer in the Sagebrush (1928), The Saginaw Paul Bunyan (1932), Paul Bunyan Bears (1947), Big Jim Turner (1948), and Tree Treasure (1950). He became the dean of Northwest writers. He was also a protector of the Northwest forest industries and worked to preserve the rich heritage of the woods. Hear Jim Stevens talk about his books and songs and Don Firth singing The Frozen Logger (recorded from a KCTS-TV show, Jan. 20, 1959). In another segment of this same show Jim Stevens & Ivar Haglund talk about songs from the Keep Washington Green Campaign

The original text of The Frozen Logger, from Bunk Shanty Ballads and Tales, begins:

As I set down one evening in a timber town café
A six foot-seven waitress, to me these words did say
“I see you are a logger and not a common bum
For no one but a logger stirs his coffee with his thumb”

Read the lyrics and hear the song as sung by Andy Blyth.

The Frozen Logger  was recorded by Odetta on Tin Angel (1954), Cisco Houston on Hard Travelin’  (1954), Walt Robertson on American Northwest Ballads  (1955), Jimmie Rogers on At Home with Jimmie Rodgers: An Evening of Folk Songs  (1960), and many others including The Weavers and Oscar Brand, and was even sung (although never recorded) by Bob Weir of The Grateful Dead. Listen to it sung by The Weavers.

In his later years Stevens moved to Seattle with his wife, Theresa Seltz Fitzgerald, where he was active in Plymouth Congregational Church, the local American Legion, and the public relations committee of the Chamber of Commerce. He retired in 1957 as public relations director for the West Coast Lumberman’s Association, and died in Seattle at age 79 on Dec. 31, 1971.

Addendum: original words of The Frozen Logger by James Stevens

My first book was an effort to create art in literary form out of of American folklore, specifically out of the shanty nights. The book is Paul Bunyan. It is on sale at all bookstores and it has the stories. (Every sale will buy me at least a loaf of bread.) Now what I want to do is to look back only to the year of 1929 and to a literary business in which I was associated with Stewart Holbrook and H. L. Davis. This was a radio program of Paul Bunyan sketches. Holbrook supplied the ideas and I provided the lies, and Davis and I together composed for the program, trying to hold true to the creative spirit of the oldtime bunk-shanty bards. One that is now in the stock of American folk songs by Burl Ives, Allen Lomax and other authorities, is “The Frozen Logger.” Here it goes:

As I set down one evening in a timber town cafe,
A six-foot, seven, waitress, to me these words did say

I see you are a logger, and not a common bum,
For no one but a logger, stirs his coffee with his thumb

My lover was a logger, there’s none like him today
If you’d sprinkle whisky on it, he’d eat a bale of hay

My lover came to see me one freezing winter day,
He held me in a fond embrace that broke three vertebrae

The weather tried to freeze him, it tried its level best
At a hundred degrees below zero, he buttoned up his vest

It froze clean down to China, it froze to the stars above
At ONE THOUSAND DEGREES BELOW is froze my logger love.

They tried in vain to thaw him, and if you’ll believe me sir
They made him into ax blades, to chop the Douglas fir

That’s how I lost my lover, and to this cafe I come
And here I wait till someone stirs his coffee with his thumb

And then I tell my story, of my love they could not thaw
Who kissed me when we parted, so hard he broke my jaw

6 thoughts on “James Stevens – Paul Bunyan and the Frozen Logger, by Stewart Hendrickson”