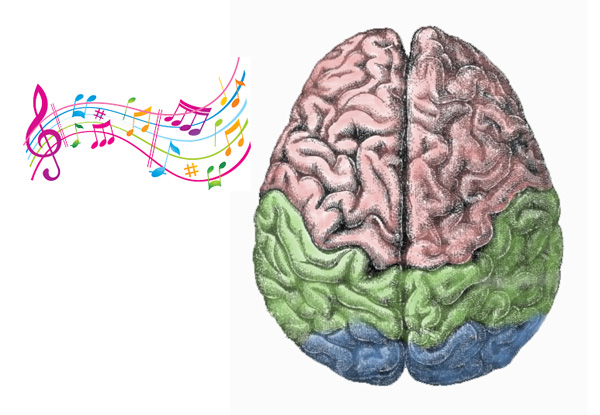 Modern research shows that music stimulates the brain. Music listening and performance are enhanced by the way we use both parts of our asymmetrical brain. Understanding how this works is the key to enjoying music, learning music, and improving your performance.

The Asymmetric Brain. The human brain is divided into two distinct hemispheres – left and right – similar in size but asymmetric in function. In terms of motor functions the left hemisphere controls the right side of the body and the right hemisphere, the left. Each hemisphere is capable doing similar things. but differ in how they do them. The two sides are interconnected by a network of nerve fibers in an area called the corpus callosum, which allows them to communicate and create a balance between the two.

Older pop psychology suggested that there are two types of people: left-brained and right-brained. Left-brained people are very logical and analytical – technicians, accountants, etc. – but not very creative or artistic, while right-brained people are very creative and artistic – musicians, poets, artists, etc. This popular idea is false and has long been discredited. We all have an asymmetric brain, but differ in the amount we allow each half to dominate or balance. The left half focuses on the details while the right focuses on the big picture. This may have conferred an evolutionary advantage. For example, a small bird intent upon picking up a seed on the ground using its left brain, would be alerted by its right brain, seeing the big picture, that a hawk is about to swoop down and have him for lunch. Even the most primitive animals have asymmetric brains the same as humans.

The left brain is important in hearing timing of notes, their duration, and rhythm – analytic and temporal aspects. The right brain is important in other aspects such as loudness, timbre (tone color or quality), intonation, the flow of notes, and expression of emotion. If the left brain is damaged by a stroke or deficiency in development in areas important to music, listening may be affected in various ways ranging from a loss of perception of rhythm or individual notes, to a complete aversion to music (amusia). Lesions or deficiencies in the right brain can result in an inability to recognize melodies and appreciate emotion in music.

Learning to Play and Perform Music. There are two ways to learn to play music. The oldest is an intuitive or oral approach – playing by ear. In older traditions music was a normal part of daily life; people were surrounded by live music. In learning your first language, you first listened to it, began to absorb it, and then tried to do it yourself. By trial and error, after many mistakes and with some guidance, you eventually learned to speak – we wouldn’t expect a  child to first learn the rules, then words, and finally speak. This is the way music was learned. Being surrounded by it, with a good memory, people absorbed music and its nuances without any conscious effort. Many traditional musicians today play very well without being able to read music or understand music theory.

The other way to learn music is from the score – by the notes. Musical notation was invented as a way to communicate and preserve a tune. It is easy for classical players and others who can readily read music. But the notes themselves don’t tell how the music should be played. The notes played through a computer as a midi file sound robotic and devoid of any interpretation or emotion. Note learning needs to be combined with listening to a live or recorded performance. But don’t feel you have to copy every note or interpretation of a performance you have heard.  Feel free in your right brain to follow your own instincts in your interpretation and emotions of the music. Make the music your own.  A teacher or mentor who knows the music also  helps.

Both methods are useful, but a combination is even better. Those who learn by the notes should also cultivate the oral approach. The score may not always be available and in many cases playing by ear may be easier and lead to a better understanding of the music. Practice on an instrument should involve almost an equal amount of time listening to the music being played. We need to use all the tools available, and that includes some knowledge of music theory – the key in which the music is played, the scale or mode, the rhythmic structure, and more. The best musicians are those who can use all of these tools.

Most of this learning involves the left brain – the position of the fingers on a violin, the bowing, which notes are slurred or not, the silent spaces, etc. All this should be memorized so that the left brain knows what to do without the player thinking about it. Like tying your shoes, once you learn, you do it without thinking or even looking, it’s automatic. The left brain is still involved, but operating in the background. There is still communication between the two hemispheres, but the right brain becomes dominant. This is necessary for a good performance. Throw the written music away! Even looking at the notes takes away from the function of the right brain. Body motion is also important; swaying to the music adds to the emotion – how can you remain rigid and still feel emotion? Music and dance are related. Closing your eyes at times also helps as it diverts distractions, visual and mental, that can shift the balance away from the right brain.

Conclusions. Everything involved in listening and playing music happens in the brain. Although knowledge of the neurological processes is not necessary, a basic understanding helps. Knowing the functions of both hemispheres helps to achieve a balance between the two. The finest performers have learned to use both sides of their brain. The more we learn, the better we can play and appreciate music.

In Addition, here are some books and articles that were useful to me in writing this article. You can read or peruse these for more information.

The Master and his Emissary, The divided Brain and the Making of the Western World, Iain McGilchrist, 2009.

One Head, Two Brains, The Hidden Brain, NPR, 2019. Psychiatrist Iain McGilchrist explains why popular distinctions between the “left brain” and “right brain” aren’t supported by research. He argues that one hemisphere has come to shape Western society — to our detriment.

Notes on McGilchrist’s The Master and His Emissary, Rufus Pollock, 2018.

Musicophilia, Tales of Music and the Brain, Oliver Sacks, 2007.

This Is Your Brain on Music: The Science of a Human Obsession, Daniel J. Levitin, 2007.

The Right Brain, The Left Brain, and the Musician, Laurie Riley Music, 2012.

Left-Brained Versus Right-Brained: Which Is The Better For Learning? Sharyn Hardy Gallagher, University of Massachusetts.